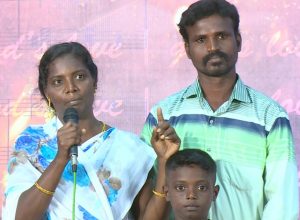 Praise the Lord. I am Inbam, coming from Madhavaram. In the year 2017, the head of my child was bulged at the back. It was a very painful situation. We took him to the hospital and did various tests. We were told that he had a boil inside his brain. That boil was very big. They also said that if they operate it, he would become paralyzed. The doctors gave up. With a lot of distress, we took him to various hospitals. I finally took him to a nearby clinic. The nurse from that clinic referred me to this meeting. She told me, “You go and attend the meeting ‘Anbarin Paathathil Oru Naal’ where Brother Stephen will be ministering. Go with faith, the Lord will surely heal your son”. For the first time, we attended this meeting on the 100th Anbarin Paathathil Oru Naal. We came with a burdened heart. We were with tears and prayers. When we went home that day, my son stopped vomiting. Eventually, he started to eat food little-by-little. After a few months, we admitted him at the hospital. The doctors said that an operation had to be done compulsorily. I was extremely petrified. I prayed saying, “God, I don’t know what to do. Please save my son. I rang up to the God’s Love Ministries Prayer tower at once. The prayer warriors prayed for my son. They said that I would bring back my child home without any operation. Similarly, when the doctors checked him they said, “We are unable to trace the spot of the boil. He has been healed supernaturally”. Now my son is completely alright.

I thank and praise God for the healing that the Lord has done for my son. I also thank Brother Stephen for praying for him.