God granted the desire of my heart. 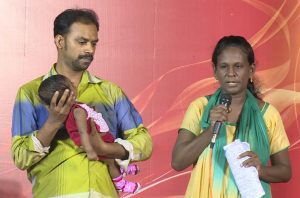 Praise the Lord.  I have not had a child for the past two and a half years. I went through a lot of struggles. I have had several abortions. While I lay asleep, I used to see snakes in my dream. I was greatly petrified. That was when my brother introduced me to this meeting Aaruthalai Thaedi Oru Naal. My husband and I attended the meeting. The first time that I came here, the message that Brother Stephen spoke, felt like as if it was for me. After the meeting Brother prayed for us and said that I have come with great expectation for the fruit of the womb and the God will bless me according to my expectation. When we returned home, while we were praying, the Lord spoke to me through the verse from the book of Judges 6:24 that says “You will call this place Shalom (meaning Peace)”. I pasted a picture of a baby and started to write all that I desired and kept praying with great faith and thanked the Lord for Shalom.

When I came for this meeting the second month, Brother prayed saying, “God will destroy the serpent that comes against you”.   Later during the third month, Brother said, “God is doing a miracle for you, this month”. In the same manner just as Brother said, I was confirmed positive. Just as I had desired, God blessed me with a son and we have named him Shalom.

I thank the Lord for blessing me with Shalom. I also thank Brother Stephen for praying for us.