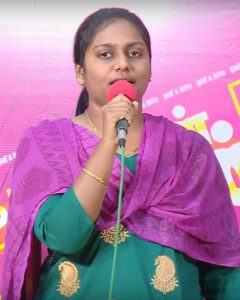 Praise the Lord. At the time of my father’s retirement, he faced a lot of problems at his work place. He got suspended as the company said that they did not receive certain leave letters. We faced a very tough time. My brother and I had to drop off our studies and seek for a job to sustain the family. This went on for quite a while. We did not even have money to even meet our basic needs. At that time, we attended this meeting Anbarin Paathathil Oru Naal. We felt like as if the entire message was given just for us. We felt very comforted by the songs that were sung and the message we received. He prayed specially for those who had problems regarding their retirement. Exactly as Brother prayed, the Lord opened a way for us. In exactly one month, my father got a notice saying that all the files that were filed against him have been cancelled out and they gave all the money that my father was supposed to get. The Lord has blessed my family abundantly.
I thank and praise the Lord for this. I also thank Brother Stephen for praying for us.
Amen.