God blessed me with a Job 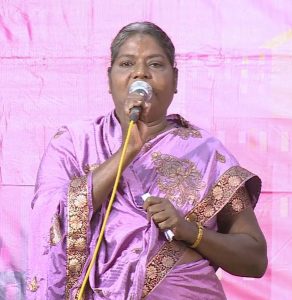 Praise the Lord. It has been nearly eight years since my husband passed away. He was working at BSNL. I did not get the job of my husband after he passed away. I used to go to the office almost every day hoping that they would give me that job. In June 2016, the moment I entered the meeting Anbarin Pathathil Oru Naal, I heard Brother say, all those who did not get a job will get a job.  All those who did not get an appointment order, will get it. In the same month on the 8th of June I got my appointment order. I thank Brother for the promising word he gave at the meeting.

Likewise, last month I had pain on my left hand.  For nearly three months, I couldn’t lift my hand.  I had severe pain.  Brother Stephen prayed for me. Now I am able to lift my hand without pain. I thank God for healing me. I also thank Brother Stephen for praying for me.

God blessed me with twins Praise the Lord. I am Vidhya. I come from Pallikaranai.  My husband’s name is Jabez. We got married in the year 2014 January 23rd. For almost 3 years we waited for the fruit of the womb. I faced a lot of difficulties in conceiving. Last year on the 24th of January, my mother met Brother Stephen.  Brother asked what her prayer request was and she said, “My daughter needs to be blessed with the fruit of the womb”.

Brother prayed earnestly and gave this word: “You shall have a double portion of blessing and today I will give it”. Brother said that God would gift me with babies for my next wedding anniversary. We prayed with great faith. Just as he said the very same month I conceived.

When I went for my check-up, the doctor told me that I was conceived with twins. They told that I need to put stitches due to some complication and had to be on complete bed rest. I would need someone to attend to me at all-times. I asked God, “What is the problem with me? Why should I put on these stitches when nothing was wrong with me.” Later, when I went for the final check up to be scanned, the doctor told me that I did not have to put stitches as everything was normal with me. This is the biggest testimony in my life. God blessed me with two beautiful girls on the 16th of October. All praise and glory belongs to the Lord. 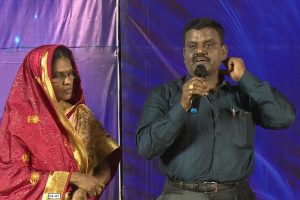 My name is Ramesh. I am 59 years old.  I have been suffering from a severe headache ever since my childhood. On February 27th 2016, while I was working in the office I suddenly fainted and fell off. I was taken to the hospital. The reports stated that three bones at the back of my neck had worn out.

When I took the next treatment my eyes got blanked-out. I felt like as if all the things around me were rotating in all directions. I had to be on bed rest all the time. I was not able to eat. I took 28 tablets per day. I was under treatment for nearly two years and did not have any improvement. It was then, that I met my childhood friend brother Irudiyaraj. I explained to him what my problem was. He told that he would take me to another doctor and that was our beloved Brother Stephen. Until then, I did not know anything about him.  I attended the meeting Anbarin Paathathil Oru Naal and met Brother. He did not know what I was going through. As he laid hands on my head, this was what the Lord spoke through Brother: “You shall have the strength of the Unicorn. You will skip, jump and run”. Those words encouraged me, as I had been bedridden for the past two years. Today, I am able to stand for more than an hour. I am also able to do my daily exercise. God has given me a lot of strength. The problem in my neck has disappeared. I thank the Lord. I thank Brother for praying for me.

God delivered me from my bondage

Praise the Lord.  My name is Sumitra.  I come from Gujarat.  It is because of the prayers of Brother Stephen that I am standing as a testimony.

Last year, when I came to attend the meeting Anbarin Paathathil Oru Naal, I was in a critical condition. We were only able to watch Brother Stephen’s program (Beloved’s Voice), through Television. The eight years that I spent in Gujarat were almost painful, as I was possessed   with evil spirit and witch craft. I couldn’t do anything. I had to depend on my husband for everything. One day my husband said to me, “We have tried different means and nothing has happened; so let us go to the hospital.”  Immediately, I asked him to give me one last chance and that was, to meet Brother Stephen.  As planned, we came to Chennai last year.   We stayed in a hotel there for almost one week.  We met Brother Stephen at the prayer tower (God’s Love Ministries) and he prayed for me. I was delivered from the clutches of evil spirit.

Now I am completely healed. The Lord restored my health. I thank Brother Stephen for praying for me with much burden. I also praise and thank God for healing me completely.

God has made my daughter a living testimony. 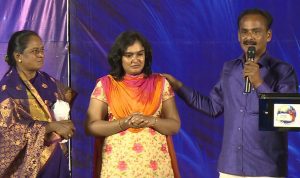 I am Ganesh.  This is my wife Parimala Kumari and daughter Ashwini.  We come from Vellore.   My daughter is a medical student.  In the year 2016 on the 5th of September she had a headache. One day she screamed in pain and was rushed to a hospital near my office. As soon as the check-up was done, she looked at me and said, “Daddy I will not be alive anymore”. And she fainted and fell down. She had no pulse. Her body became cold. Both my wife and I were weeping. I did the first-aid ‘CPR’. As soon as I did it, she began to breathe. We immediately rushed with her to a hospital in Vellore. When they took a scan, they said that she was in a critical situation and had to be kept in the ICU.  After the reports had come, the doctor diagnosed her with AV MAL formation brain. We requested God’s Love Ministries to pray for her.

On September 6th, we attended the meeting, ‘Anbarin Padathil Oru Naal’ . That morning, before the meeting commenced, we met brother and informed the condition of our daughter. That day, the words that the Lord said was, from the book of Joel 2:21 “Fear not.  Be glad and rejoice, for the Lord has done marvelous things”. That night, we cut off her hair and a surgery was done. I went to the pharmacy to purchase some medicines and there I saw the same verse: Joel 2:21. As I returned from the pharmacy to give the medicines to the staff nurse, I turned back and saw the same verse in the hospital.

I conveyed all this to my wife and kept praying.  Later we brought our daughter home. And found that she could not walk, neither see, nor could she talk. We kept praying and called out to God’s Love ministries. Brother himself called us and was about to pray for my daughter but she unexpectedly fainted and fell down.  We cried aloud and shouted.  We were asked to bring her to the God’s Love Ministries Prayer Tower in Kottivakkam where brother prayed for nearly eight days, both morning and evening. All the prayer warriors prayed for her too. Each day God healed her. From the first day of prayer at the Prayer Tower, when Brother placed his hand on her head, she got healed completely. As brother kept his hand on her shoulder and prayed, the shaking of her head stopped. Each day God began to do new things. Today God has enabled my daughter to stand before you all as a living testimony. We thank God a thousand times. It is only by the grace of God that my daughter is standing to testify today.  God has healed my daughter completely through brother’s earnest prayers. All glory to God.

My dear brothers and sisters in Christ, you might also be suffering from problems like what Ashwini had. God is telling you that He is the greatest doctor. He will heal you according to the verse written in the bible: “By His stripes you are healed”.